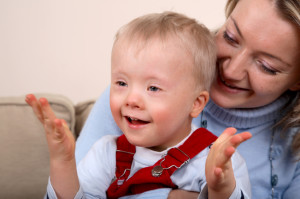 It’s Thursday morning and eight visually impaired babies and toddlers accompany their parents to the music therapy program at the Canadian National Institute for the Blind (CNIB). They file in one by one, many of the parent’s looking disheveled and tired. The parents help each child take off their coat before finding a comfortable place on the floor. The child sits in front while their parent cradles their little body from behind.

There is a lot of movement as people settle into a semi circle facing me. I too am on the floor with a flute in my lap. One child is flicking his fingers and moving his head rapidly back and forth to take in everything that is going on around him.  Another young girl, new to the program, huddles tight against her mother’s chest while two other children vocalize sounds of displeasure probably at the thought of being somewhere unfamiliar.

The parents look at me expectantly as I hold the flute to my mouth not yet speaking a word.  As soon as the voices calm, and I release the first tone, silence strikes amongst the group members leaving only the haunting tones of the deep, warm instrument being played. The girl curled in her mothers arm tilts her head towards the new sound and smiles slightly. The two children vocalizing become settled into a state of calm. The child moving his head from side to side stops mid shake. And the parents audibly exhale and release the tension on their faces, some even closing their eyes in the stilling sounds.

The flute melody comes to a close and I sing “take a deep breathe in…..” as I  pick up my guitar and start an uplifting rhythm sequence.  The “greeting song” has become familiar to the parents and the children over many weeks.  The use of repetition has paid off.  Due to the songs familiarity everyone begins to join in after just a few words. I continue with “blow it out.”  Together, the child and parent blow.  Sometimes they blow out into the air in front of them and sometimes in each other’s hair causing faint giggles.  I introduce silly words that use the muscles in the mouth.   First, “Di, Di, Di” – simple yet strong.  Then “Boojee, Boojee” – the lips into a pucker and then pull them back sharply often bringing about more bouts of laughter.  And finally “NingGa” – more difficult as the tongue is required to go up to the roof of the mouth followed by a hard G.  Some of the children are saying very few sounds while their parent models each word. The parent holds their child’s hand on their lips, their throat, or their cheeks.  With each sound their child it is greeted by smiles and verbal affirmations from their parent.

With music a safe place of trust is created. The world may not always be kind to these children but for now gaining confidence to reach out into the wide-open spaces alongside their parents is an important point of development.  It is also a positive experience for the parent to observe the capabilities of their child.

The final music intervention is an instrument improvisation where the child and parent play an instrument of their choice without verbal cuing. The use of instruments offer each person the opportunity to explore unique textures coupled with the sound – a multi-sensory experience. One person identifies another person by their unique sound. Occasionally a person may bump into another small body searching for a new sound and a happy squeal of acknowledgement is released.  The parents are smiling as they witness the unsolicited interactions and physical responses.

Jennifer Buchanan is a professional speaker and accredited music therapist. She is Past-President of the Canadian Association for Music Therapy and owner of JB Music Therapy

“Music Speaks” Blog: 50 Musical Motivators for 2011 (MMs) aims to Help you Relax, Reflect and Remember what you Value Most