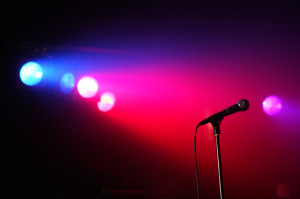 Giving a person with autism the chance to perform for their community has many positive benefits for performer and audience.   For someone with ASD communication on the best of days can be a huge obstacle.  For the community layman who does not understand a neurological disease like ASD, the condition itself can be partition between people.

In 2005 I witnessed a young man who received weekly music therapy for 10 years  begin a new direction for music in his life, preparations for a performance at a local coffee house.  Over the following weeks he worked with his music therapist on the song he had written, microphone handling, as well as platform mechanics (ie.how to stand and make infrequent eye contact with his audience to keep the audience engaged).  After a few practice performances with two or three family members to validate his accomplishments he said he felt ready to reveal all he had become.

With his brown hair newly cut and donning a tranquil blue sweater., he was standing tall, albeit with slightly turned in shoulders as he went to the stage where he took his microphone from his therapist.  Giving a simple nod to the guitar player, a cue he had learned that would let his band know he was ready to begin, he turned towards the audience and held the microphone just under his chin.  The instruments began to play. You could hear a soft whisper through the microphone it counted 1 – 2 –3 – 4 – 1- 2- 3-  and then a deep breathe.  He launched into the first words “Love is a burning thing, it makes a fiery ring,” His low voice resonated with every note sung on pitch.  Near the end he repeated the final chorus a second time, and gave a wee smile to his music therapist who then smiled back as he sang the last line of the song – “ring of fire, the ring of fire.”

The small and mighty audience were already on their feet clapping.  His grandma who had raised him sat in silence along the side bench in the coffee house.  She had tears coming down the side of her face and a reflective smile.  She knew that this moment had taken years to reach.  To the audience the magic happened in 2 minutes and 40 seconds, to his grandma an entire childhood of preparation passed before her eyes.