A week ago I wrote about my music therapy mentor Fran Herman.  Today I learned the loss of another mentor whom I barely knew, but who had great influence over me theses past few months.  Louise Guy and I shared the stage at the University of Calgary at the invitation of Dr. Carole-Lynne Le Navenac.  Louise and I both arrived 45 minutes early, sat on a bench,  laughed, held hands and talked about her incredible life.  We had been invited to speak to healthy aging..me because I believe music is a part of a healthy life and Louise because she lived a healthy life.  I could have listened to her for hours.  Before she spoke she jumped up on the stage.  Her 5′ tiny frame filled the room.  She was radiant.

We planned a tea together but she became ill shortly after our presentation.  On September 2 she was feeling well enough to have me over.  She carefully walked down the stairs to open the door for me and again carefully walked back up.  This was a different woman than I had met a few months earlier…or so I thought.  She made us tea and brought out cookies.  We sat on the couch and talked with me for an hour.  She was again spirited and witty and very noble (I don’t think she would like that much so I will change it to extremely graceful).  I have since attempted to reach her to visit again before her planned trip to London to celebrate her 75th wedding anniversary with her “dear Richard.”  Today I received this email from Richard – and I would like to share it with you as I feel we have much to learn from the Richard’s and Louise’s of the world. 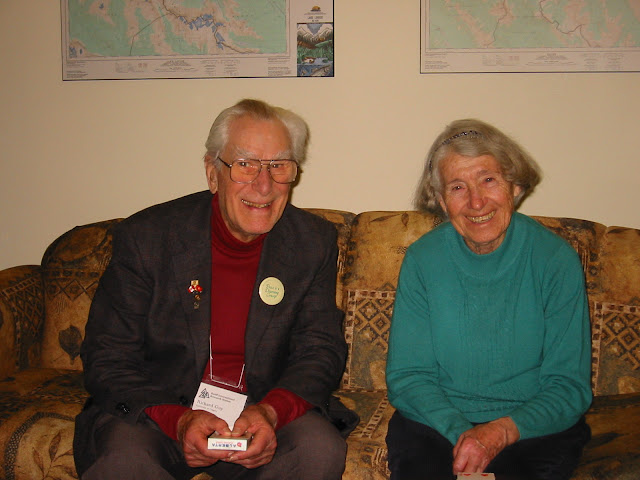 My generation is famous for talking about  “living our best life” …. Louise and Richard didn’t speak about such things..they just did it…their life as a couple and as citizens of the world is an example of living a good life.  Here is Louise’s final message from the hand of her “Dear Richard.”

(Nancy) Louise Guy, 92, died on husband Richard’s 94th birthday, leaving sons Mike & Peter (wife Janet and children Andy, Kenny and Rosie) and daughter Anne (and her chidren by Peter Scott, Kathy and Carol) and Carol’s husband Colin Booth and greatgrandchildren Sarah and Emily. Born in Islington, London, she spent her first few years in Switzerland, and then grew up in Leeds. She trained in domestic science in Leicester and started
teaching during World War II.

Her life was one of service, devoted to ameliorating and prolonging the lives of others, setting an example, encouraging those less fortunate then herself, remaining remarkably active in spite of several severe medical setbacks, teaching lepers in Singapore and the deaf in Calgary, winning her section of the Lake Louise Loppet and taking up rock-climbing when in her fifties, and continuing until she was eighty, delivering meals-on-wheels, working for peace (Ploughshares) and the environment (Friends of Nose Hill), climbing the Calgary Tower (for the Alberta Wilderness Association) and Ha-Ling Peak (for her own enjoyment) every year into her nineties. Last year she won the CBC’s award for the Most Active Senior. She was made an Honorary Member of both the Alpine Club of Canada and of the Calgary Mountain Club. She was a patron of the Mountain Guides Ball and was given the A. O. Wheeler Award for service to the Alpine Club of Canada, having, amongst many other things, rescued
their General Mountaineering Camp in the mid-eighties. She supported Eyesight International and numerous other medical causes. Her request was that there should be no funeral, and that tokens of remembrance
should take the form of donations to charity: such as those mentioned above; or medical research, especially for cancer and the heart; or The University of Calgary (where she endowed the Richard & Louise Guy lectures); or the Alpine Club of Canada. In due course there will be a celebration of her life.