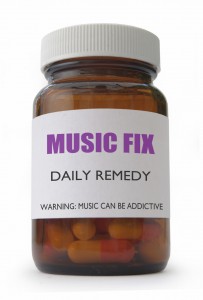 Many people have encountered feeling down or even feeling totally apathetic about life at some time or another in their lives. For Brad, chronic PTSD and depression robbed him of living independently, of having many friends his own age, and of feeling involved in what was happening in the real world. Music helped him connect to a bigger world−the world closed off by his dark orange drapes.

When I entered his room, Brad was laying on the top of his bed covers in his pajama bottoms and well-worn Ramones t-shirt. The sun was shining brightly outside, but the thick orange curtains were pulled tightly across the window. You could not see anything through them. When I entered, it took a few seconds for my eyes to adjust to the dimness of the room. Two twin beds were pressed against parallel walls with a nightstand in between and a small clock radio on top. Brad’s roommate was also in the room. His eyes were shut, and he was curled up towards the wall and well-hidden under his pillows and blankets. He did not move or speak for the duration of my visit.

Earlier that day I was asked by a member of the care staff to help Brad get motivated. “He needs something,” she said with a flick of a hand in the direction of his room. “He rarely goes out anymore. He just lies there.”

Looking quickly at Brad’s chart, I read that he was forty-six-years old and had spent almost half his life in health-care facilities. Brad suffered from severe Post Traumatic Stress Disorder (PTSD) (1) and chronic depression (2) due to his service in the first Gulf War. When his doctor determined he could no longer look after himself, he was admitted into a long-term care facility for assessment. That was almost twenty years ago.

Brad was one of the youngest residents in this facility. His schedule was a lot like many of the other residents. Each day, he went to the breakfast room for 8:30 a.m. After breakfast, he went back to his room and listened to his radio until smoke break at 10:30 a.m. After his five-minute break he went back to his room, lay on his bed, and listened to the radio until noon when lunch would be served in the communal dining room. Twice a week he would watch a movie, take a walk, or go for a swim with care staff. He ate dinner precisely at 5:30 p.m., went out for another smoke break, watched television, and went to sleep. Every day was the same.

I met Brad on a Tuesday; he was somewhere between smoke break and lunch. I closed the door to the noisy hallway behind me. Even with the door closed, I could still hear cutlery clanking, wobbly food trays squeaking, and heavy footsteps stomping past the door. Brad didn’t seem to pay much attention to the noise and when I asked him what he was doing he said, “Just listening to the radio.”

The radio was almost inaudible. When I adjusted my hearing, I picked up on a few strains from John Cougar Mellencamp. After introducing myself, I was told it was okay if I stayed for “a little while,” so I pulled up a chair.

Suddenly, I was startled by a large crash—a food cart collapsed in the hallway. Neither man flinched. I took the opportunity to ask Brad what he thought about all the sounds around him including the sounds outside his door. He turned his head slightly toward the wall and shrugged his shoulders. I explained that I believed sounds have many personalities and that I was affected emotionally by the crash we just heard.

Again, I asked him to explain what it sounded like to him. He looked at the wall again and said very slowly, “Unhappy…muddled up… and lonely.” The last word was almost completely inaudible. He then looked down at the floor and said a bit louder, “I noticed you brought a guitar in here.”

“Would you like me to play a little?” I asked.

He leaned over, turned off the radio, and stared at my guitar. I put the strap over my head and set my hands in position to play the first chord of a James Taylor tune. Brad was silent throughout. When I finished, he lifted his head a little higher on the pillow so his shoulders were elevated. I could now see him more clearly. The lines on his face made him seem much older than his forty-six years. I took a couple of deep breaths and began to sing a Bob Dylan song.

By the end of that song, Brad had shifted his pillow over to the side and was partially sitting up in his bed. I took a couple more breaths and sang yet one more song, this time from the Rolling Stones first album release. Once more, there was silence at the end of the song.

Finally, Brad looked directly at me, smiled, and sat fully upright with his feet hanging on the side of the bed. “Wow, those are good ones,” he said. He began to suggest more songs and smiled again when I said I knew one he spoke of.

The more songs I played, the more Brad opened up. Eventually, every song he suggested was coupled with a personal story from his past. It wasn’t long before I saw a clear picture of the man now sitting in front of me. Once upon a time, Brad was a fearless, strong, vibrant and independent man who desired something more from his life.

The hour went by very quickly. As Brad walked me to the front door, I noticed his eyes were glistening a little in the sunlight. He suggested a few songs for the following week and waved goodbye.

This story was taken directly from the book TUNE IN.

Jennifer Buchanan, BMT, MTA is the happy owner of JB Music Therapy and Author of TUNE IN. Our “Music Speaks” Blog aims to inspire you to use music with greater intention and knowledge and to access music therapy services as required. Call us for more information or browse our website for ways music therapy can support you.